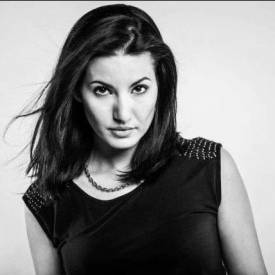 Fernanda Martins (also known as Dot Chandler) is considered nowadays as one of the biggest female names of the world’s Techno scene.

Owner of an amazing mix technique, great charisma, and her unmistakable fun way to communicate and connect with the crowd, Fernanda Martins does not leave anyone indifferent.

When she is playing she loves to abuse of cuts, scratches and efxs to create her precise, detailed and ‘explosive’ mixes that, together with her irreverent way to be, impress to any electronic music lovers wherever she goes.

Above all, Fernanda Martins is known by her excellent music selection. Since her beginnings, she experienced with different sub-genres of Techno music; from the most classical and underground sonorities, going through dark, acid, melodic, deep and hard textures. Her skills when mixing allow her to explore the vast universe of Techno. But all her sets are, and will always be, filled with songs full of great energy and strong character.

Whether playing the most powerful hardtechno, or even, the most pure techno, Fernanda makes clear that she knows how to use all the flexibility and versatility that techno offers her.